New Visual Studio C/C++ users sometimes get tripped up by IntelliSense errors, so today I’ve decided to share the secret, undocumented solution: just turn them off!

IntelliSense is a nice user interface feature when it works, but it has nothing whatever to do with building and running your C/C++ code. IntelliSense errors do not equal compiler errors, and trying to “fix” them is fruitless. 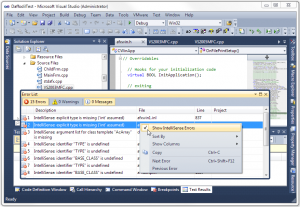 There is one small irritating issue with this solution: your setting is not persisted in the registry, so the errors have to be turned off every time you start Visual Studio.

Recently I had to debug an intermittent access violation exception in one of my AutoCAD plug-ins. I needed to get the exception while the debugger was attached so I could break the process and analyze the state of memory before AutoCAD’s global exception handler got control. Unfortunately, sometimes it took several hundred runs before the exception occurred.

To make matters worse, AutoCAD was throwing exceptions on shutdown that had nothing to do with my code. If I started AutoCAD manually under the Visual Studio debugger, I had to dismiss those shutdown exceptions manually every time. I needed a way to script the task of starting AutoCAD under the debugger hundreds of times in a row until the exception finally occurred.

I had also planned to see if I could suspend the main thread, detach my custom debugger, and manually attach the Visual Studio debugger when my target exception was triggered so that I could utilize the more advanced VS debugger UI. In the end I never got around to trying the debugger switch because I discovered the problem by simply displaying some relevant details in a simple message box when the target exception occurred.

As you can see, I hardcoded the application path and command line, which includes a script file that simply quit AutoCAD after it started. I then used a batch file to run the custom debugger in a loop, thereby starting and quitting AutoCAD each time through the loop. I made this debugger a console app, but it could just as well be a window app.

I don’t claim to know anything about writing debuggers; this is just something I cobbled together after doing a bit of searching on the web. I decided to share the code in case someone else runs into a similar debugging scenario.

One of the cardinal rules of C++ exception handling is “don’t catch what you can’t handle”. Of course there are always, er, exceptions to the rule, but the basic principle always holds. The consequences of violating the rule are less severe in the .NET world, but even there it’s a good rule of thumb.

Back in the old days you needed permission from a deity before you could use catch(…) to catch all exceptions. By the turn of the century, an Executive Order was sufficient. These days I see posts all the time on programming forums that go something like “My plugin crashes when I call ThirdParty::Function(). How can I catch all exceptions in ThirdParty.dll?” Bzzzt. Foolish programmer alert!

The .NET framework allows exceptions to be used for signaling, so inexperienced programmers often think that’s how they work in C++ as well. I think this is a case where the less rigorous .NET programming model bleed-over effect has negatively impacted C++ programming.

Creating and calling functions is one of the most fundamental tasks in C++ programming. The function declaration serves as the primary description of a function’s interface – or contract – with callers, thereby making it the most important piece of code documentation. A good function declaration should convey as much information as possible. I’m sure an entire book could be written on the topic of function interface design, but I’ll just touch briefly on a few factors to consider when designing a function’s interface.

The int type is a signed value, but a count is always zero or greater. The return value should at least be unsigned int, or better yet size_t:
size_t CountWords(char* pszInputString);

Likewise, arguments that must never be negative should always be declared as an unsigned type.

By value or by reference

If the caller needs to pass arguments that the function will modify, they must be passed by reference. If the argument will not be modified, then it should be passed by value if it is a trivial type, else by const reference (except in unusual cases). For example:
bool CountWords(const CountOptions& options, char* pszInputString, size_t& ctWords);

Incoming arguments that will not be modified should be declared const. This conveys a clear guarantee that the function will not try to modify the incoming value. Proper const delarations also give the optimizing compiler more ways to optimize the code.

Since counting words does not require the input string to be modifed, the CountWords() function’s string argument should really be const char* const (constant pointer to constant char) instead of char*:
size_t CountWords(const char* const pszInputString);

Now the caller can pass a string literal or any other string (even an MFC CString), and be assured that the CountWords function won’t change it.

In C++, the exception specification conveys information about what kinds of exceptions a function may throw, either directly or indirectly via functions it calls. If a function cannot throw an exception, you should include the empty throw() suffix on the function declaration.

Putting it all together 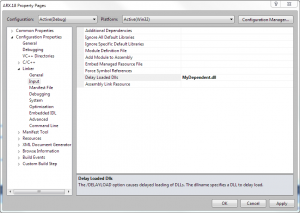