The ManuSoft web server has been humming along steadily for the last 7 years on an old Compaq server running Windows 2008. You may have noticed that it’s currently offline. Actually the server is still humming along just fine – it’s just that nobody can connect to it.

I had some connections with the IT guy at a local printing business, and for practically no cost I had been using two static IP addresses over their T1 connection. Unfortunately the IT guy has since moved on, leaving nobody there with the ability to manage my connection. My sweet deal was destined to collapse eventually. That’s exactly what happened last week when they had some configuration changes made to their network.

I’ve now moved this blog to the cloud (Windows Azure), and I will be moving the rest of the services to the cloud over the next week or two. Wish me luck!

AutoCAD 2015 includes a new feature called Application Manager. I’m sure it serves a lofty purpose, but it comes across a lot like the slimy Norton and Adobe updaters that are really just Trojans in disguise. It gets installed by default, with no option to prevent installation. To Autodesk’s credit, they do provide instructions for preventing installation of Application Manager, and instructions for removing it after the fact. Uninstalling requires several additional clicks, as if they really, really want you to think twice before taking such a drastic measure.

I don’t want anything starting when I log into Windows except the bare minimum, so I uninstalled Application Manager forthwith. It can be installed and started manually if I decide to use it later. 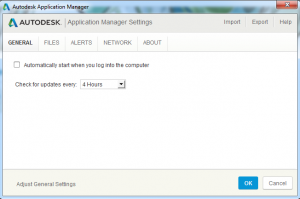 If you decide to use Application Manager, there are some configurable settings. There is even a UI for most of the settings (such as disabling the automatic startup), but there’s a catch: to use the UI for changing settings, you first have to agree to the Autodesk Privacy Statement (and give Autodesk access to information about your installed software). I’m sure this is just an oversight, but the paranoid will not find it comforting.

Application Manager settings are stored in a plain text file, located by default at:

If you don’t want to agree to Autodesk’s terms, you can still change settings by editing the .ini file in a text editor like Notepad (just enter the file path above in Start -> Run). For example, change the line to AutoRun=false if you want to disable “Automatically start when you log into the computer”. Note that this setting is somewhat misleading: Application Manager always starts regardless, but it quickly exits again if AutoRun is set to false. If you already agreed to the privacy policy, but have since changed your mind, you can set PrivacyPolicyLevel=0.

Those of you using your Android phone as an internet connection may be paying more than you need to pay. Many phone companies here in the US charge extra to enable tethering capability, either by providing their own OEM tethering app or by enabling the phone to serve as a Wi-fi hotspot.

With some experimenting, I found that my Motorola Droid 2 Global from Verizon can be tethered just fine right out of the box, and without paying anything extra.

Recently I’ve been playing nursemaid to my ill mother, so I frequently take my work along with me on overnight shifts. I’ve settled on connecting to my main desktop machine via remote desktop, and using my 15″ laptop as the client.

The remote desktop connection works great. My 3G connection is noticeably slow, but it’s very workable. Since I’m working on my office computer, there’s no need to sync anything, and I can pick up from one place right where I left off in another. In a pinch I can even use my phone as a client (using an inexpensive remote desktop client from Xtralogic).

To get my internet connection, I installed Motorola’s drivers on my Windows 7 laptop, then enabled the Bluetooth controller on my phone and paired it with the laptop. Now I can connect my laptop to the internet via Control Panel simply by connecting to the phone as an “Access Point”, as shown below.

I don’t know whether this technique works for other phones or other carriers, but it has certainly worked well for me.

At Autodesk University, Autodesk CEO Carl Bass introduced the term “Infinite Computing” in an attempt to define Autodesk’s perspective on “the cloud” from a unique angle. I think the term is a brilliant and effective use of terminology because it focuses an otherwise nebulous concept and it radiates a sense of real and immediate purpose.

Infinite computing is not really infinite, of course, and it’s certainly not infinitely accessible. However the metaphor is apt, because like the physical universe, as long as the virtual universe keeps expanding it is essentially infinite. [I can’t resist having some fun and taking the analogy a little bit further: at some point, Moore’s law will encounter relativistic effects, and we’ll realize that every transistor warps the virtual space-time continuum in proportion to the square of its clock speed.]

So why am I bearish on the prospect of infinite computing?

Let’s say you buy a computer with multiple processors for, say, AutoCAD. Two processors can produce a nice performance boost, because AutoCAD can utilize 100% of one processor while the operating system uses the other. But what happens if you quadruple your capacity to eight processors? Unless you’re running independent programs that can use the extra processors, they offer very little benefit and are essentially wasted.

The moral of the story is this: an infinite computer is ineffective and inefficient unless it has an infinite number of simultaneous tasks to perform. It costs computing power to manage parallel tasks, so the practical limitations of “infinite” computing make it obviously unrealistic for all but highly specialized tasks. Even if we give it a more accurate name like “massively parallel computing“, such a system is hardly “sustainable” (to use another modern term of art) due to the inherent inefficiencies.

A compromise is necessary. There are new ways to look at old problems that enable a more parallel approach to finding solutions, and I have no doubt that many engineering problems can be restated in a way that makes them amenable to parallel processing solutions — but that’s hardly a revolutionary concept, and it certainly does not require an infinite computer for its implementation.

In the final analysis, “the cloud” is going to be about individuals connecting to each other and to their data seamlessly and in a location-agnostic way, and the “infinite computer” will be what they use to do it. Nothing more, nothing less.