The increased sharing of electronic CAD data (ala BIM) holds a lot of promise, but it also exposes companies and individuals to additional liability and risk. This additional risk is coming into focus more and more as actual cases of costly legal battles confront engineers and architects.

The June 2008 AUGI wishlist results contain “Design File Locking” as the top wish by a substantial margin, and Shaan Hurley lists it as number 3 in the AU 2008 AutoCAD wish list. Clearly, interest in file and IP security has been growing steadily.

As demand for IP security grows, there are sure to be snake oil security vendors trying to cash in on it. I received a spam email a few days ago from SafeNet, Inc. promising “a cost-effective and easy to integrate solution that provides reliable and effective security through the use of digital signatures.” Whenever I see such statements with a long string of buzzwords, my snake oil alarm goes on alert. Digital signatures are for authentication and establishing trust — they cannot and do not provide “reliable and effective security”, although I suppose they could be used by a system that does.

In the last year or two, a number of companies have claimed to market software that “secures” AutoCAD DWG files. When I see such a claim, it invariably refers to software that creates an anonymous unequally scaled MINSERT entity. These can be created or “exploded” with a few lines of AutoLISP code. Frequently these companies claim to “encrypt” the drawing, which may sound sexy, but is an outright lie. If this is a level of “security” that meets your needs, at least use one of the many free versions posted throughout the internet (DETER.VLX from DotSoft is one I know of).

There are solutions, but they always require changes in the workflow process that involve difficult tradeoffs and careful evaluation of what is technically feasible and practical versus the costs of implementing the changes. There is no such thing as installing a single piece of software to instantly solve the problem. If you are looking for ways to protect intellectual property in your drawing files, don’t be fooled by snake oil security vendors.

Disclaimer: One of my hats is the president of CADLock, Inc., makers of CADVault for AutoCAD.

I have presented a class entitled High Octane ObjectARX at Autodesk University the past two years. In 2006 the focus was on project organization, and last year I focused more on techniques for supporting multiple versions of AutoCAD with a single Visual Studio solution, touching briefly on testing and profiling. For 2008 I plan to focus on debugging.

To get you in the mood, I decided to blog about a capability of Visual Studio that often goes unnoticed and unused: breaking on an exception. This works just like breaking on a code breakpoint, except the debugger breaks execution *before* the exception handler gets control, thus allowing you to get a clearer picture of what was happening immediately before the exception occurred.

In an ObjectARX project, all kinds of exceptions can occur. Sometimes they are perfectly normal exceptions caused by and handled by AutoCAD. Many times, especially during development, your code triggers an exception that causes AutoCAD to crash, and it’s not obvious what caused things to go haywire.

When unexpected things happen while running your code under the debugger, the first order of business is to inspect the debug output window to determine what happened. The debug output window (Debug->Windows->Output) displays a message whenever an exception occurs. Sometimes a series of exceptions occur, usually all caused by the same root problem. Breaking when the first exception occurs will likely yield the most useful information about the cause.

Once you examine the debug output window to determine the type of exception that occurred, open the Exceptions dialog (Debug->Exceptions) and tell Visual Studio to break when the exception is thrown: 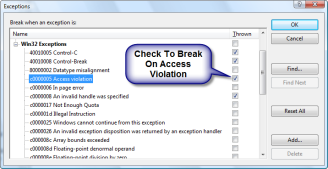 Visual Studio contains a prepopulated list of common exceptions to choose from, or you can add new ones if you need to break on an exception that is not already listed. Many times, breaking when the exception is thrown allows you to inspect the stack trace to determine which one of your functions is to blame — and in the vast majority of cases, it will be your code that is at fault!